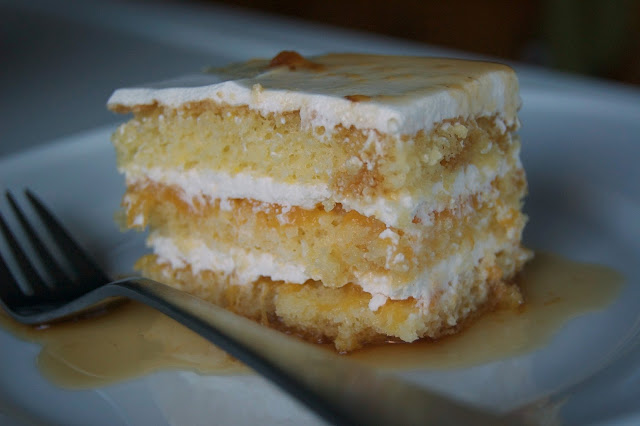 This week at TWD, we were suppose to make a French Strawberry Cake. Instead of strawberries, I made it with peaches.

We had a bbq last week and had some leftover peaches when we made grilled peaches with rosemary ice cream (from Cooking with Michele). Yum!
Since I couldn't get myself to buy strawberries when I had perfectly yummy fruit at home, I went with peaches.

This was a pretty intimidating recipe. From reading the TWD bakers' failures and successes, I got a little scared. Since it's a genoise cake, the egg/flour folding was the make or break stage of the recipe. I took the advice of a fellow baker and sifted the flour into the batter. This definitely helped decrease the clumps and decrease the folding.
I didn't have a 8" pan, so I used a square pan, which made the cake look like a cute french cake. Yay.

The day I made the cake, I felt it had a very subtle peach flavor and the cake itself was quite dry. I was quite disappointed with it all and was thinking of throwing the whole thing away. But good thing I'm a lazy bum and just stuffed in the fridge, because the next day...man oh man....it was soooooo much better! It seemed the cake just needed a little time to absorb the moisture from the peaches. It turned out to be moist and airy with a beautiful peach flavoring. Very nice.

Since I had some leftover grilled peaches with brown sugar syrup, I drizzled that on top of the cake. It made it even better. It gave the cake a smoky flavor to it.

If you are interested in making this wonderful cake, check out Sophia's blog, Sophia's Sweets, and Allison's blog, Sleep Love Think Dine.

Notes: I used 4 good sized peaches for the filling. Since they were pretty juicy, I cut them a little differently. I cut them in half, twist the halves apart, and then using a paring knife, ran the blade around the seed. I grabbed the tip of the seed and popped it out. If anyone knows a better way to keep a peach intact, please tell me. It took me a few peaches to figure this method out. Hmm..I guess I could’ve googled it. Lesson learned (the hard way).
I didn't have a slotted spoon, so I used a colander with a bowl under it to drain the peach mash liquid.
Posted by jen at 7:57 PM 6 comments: 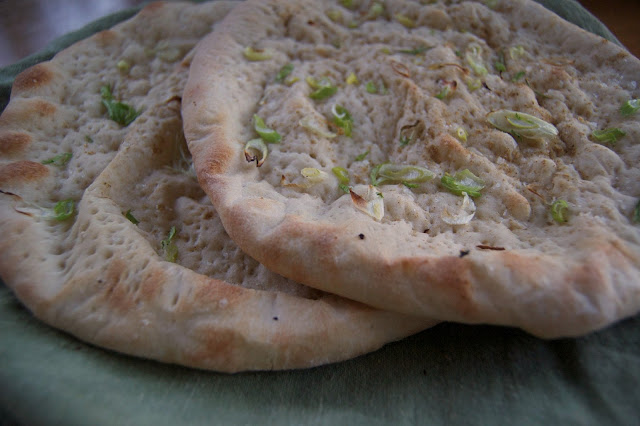 For the recipe, check out this week's hosts, Maggie of Always Add More Butter and Phyl of Of Cabbages & King Cakes.
Posted by jen at 6:57 PM 3 comments: